This year has been very eventful for me. I have setted in my new job, on the publication side have (only but still!) managed to finish one new book which will be published in 2013 and we have moved with the entire family to the South of Germany.

Here we like it, the nature is nice, the nabours friendly and we feel comfotable. My highlights of the year are a beautiful holiday in South of France with my family where we had everything from a hike on a donkey’s back in the mountains to relaxing beach time at Atlantic beaches. In my university we managed to achieve a lot thanks to an extremely committed team. We finalised our system accreditation, a special certification of our quality management system which now allows my university to create and award degrees on our behalf. We committed the university to a new 3 year quality strategy and started to develpp a learning innovation strategy paper which will be finalised until February this year. IN adition we were also starting a dialogue on a new form of Master programmes which will be now de eloped and feasibility tested until summer 2013. The colleagues are very creative and it is fun to work there.

2012 was my final year as GMW President (www.gmw-online.de). I think that we managed to achieve all the gooals which we developed in the beginning of my term in 2010. It was an extremely rewarding time with great colleagues from Germany, Switzerland and Austria. I have been elected Board member for another 2 year term and will continue to support the association from this new position now. prof. trhomas Koehler from TU dresden took over the post of president.

In the European Foundation for Quality in E-learning I am in my second year of my three year presidency term now. The Foundation has continued to stabilise organisationally and we have a new board elected since SEPT 2012 with many old and some new Board colleagues. The work there is very exciting because it is looking at education development from a European perspective. The Foundation is successfull developing own and participating in existing innovation initiatives which are at the real forefront of European education innovation. For 2013 we will have to focus more on our members and their interests, reach out to them and develop added value services for the networks. I am already looking forward to theannual conference of EFQUEL in Barcelona in SEPT. We will meet there!

For now I wish everybody a beautiful new year2013!! 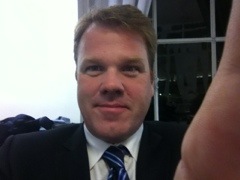 Ulf is a learning innovation expert and has been appointed Professor for Educational Management and Lifelong Learning at the Baden-Wurttemberg Cooperative State University in Karlsruhe in 2011. From 2011-2016 he held the position of Vicepresident at the same university and has been responsible for Quality and Academic Affairs. He held positions as Associate Professor of University Duisburg-Essen (Germany), Professor for Technology Enhanced Learning of University Augsburg (Germany) and Associate Professor of the Graduate School for Management and Technology of the University of Maryland University College (USA). Ulf is a featured keynote-speaker and speaker to audiences in more than 45 countries and is author of more than 150 scholarly articles with over 3000 academic citations. Ulf holds degrees in English Language, Social Sciences and Education Sciences from the University of Bielefeld, where he finished his Ph.D. with honors in the field of Technology Enhanced Learning in 2003. He was awarded his habilitation in 2008 from the University of Duisburg-Essen.
View all posts by Ulf-Daniel Ehlers →
This entry was posted in Blogroll, Uncategorized, year's end and tagged efquel, gmw, New year's eve. Bookmark the permalink.